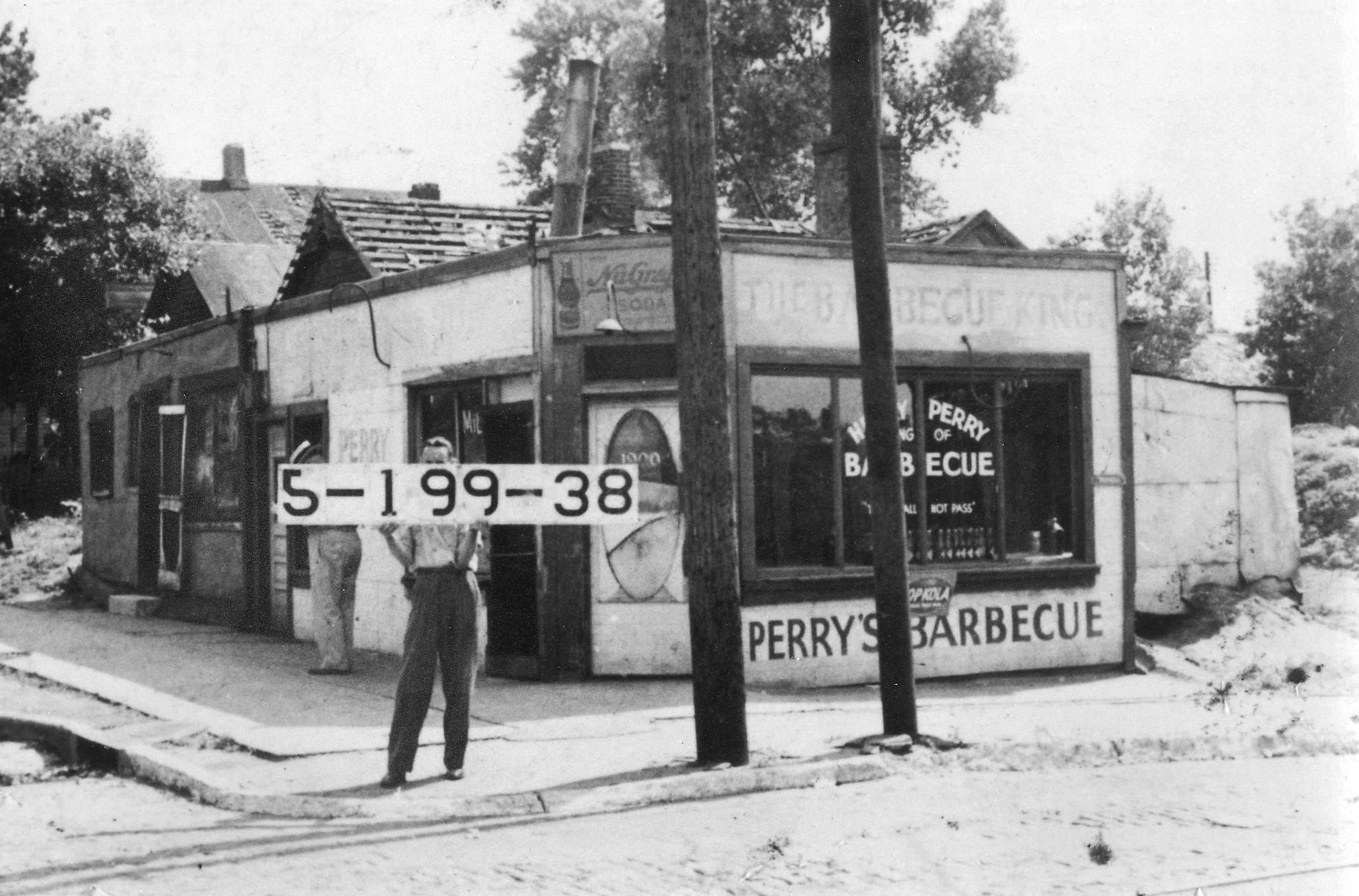 ABOVE: Henry Perry's joint at the corner of 19th & Highland. The photograph was taken in 1940 as part of a Works Progress Administration project documenting real estate in major cities across the country. The man holding the identification number is a WPA employee.

KANSAS CITY HAS HAD ITS MONARCHS AND ITS ROYALS, but its first real king was Henry Perry.

Henry Perry was born in Shelby County, Tennessee, in 1875. Not much is known about his family, but his parents were almost certainly former slaves, and Henry was probably their only child. It is known that Perry left home when he was 15, and spent the next sixteen years as a cook on riverboats ferrying passengers and cargo up and down the Mississippi River. By 1907, the young man was apparently ready for a change. He left his life on the river behind and ventured west to Kansas City. He was an experienced and hardworking kitchen hand and soon landed a job as a porter in a Quality Hill saloon. There was, however, an entrepreneurial thirst in him that busing dishes could not quench. Months later, Henry Perry was selling barbecue from a pushcart in an alley near Eighth and Banks Streets in the heart of the city’s Garment District. 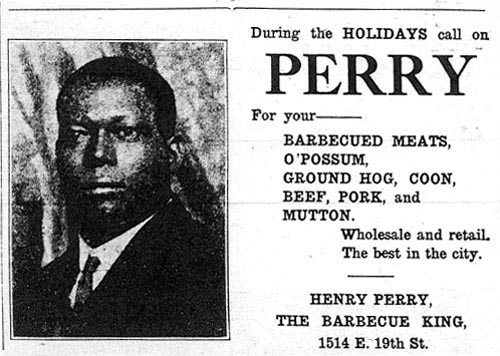 In late-Nineteenth Century Shelby County, Tennessee, barbecue would have been as much a part of daily life and culture as was the Mississippi River. It’s likely that Henry Perry learned how to make barbecue at a young age, and understood its moneymaking potential. His barbecue must have been pretty good, because it wasn’t long before he’d earned enough money to expand his operation and move it to the 18th and Vine district, where he began selling his barbecue from an old trolley barn. Arthur Bryant, who years later learned barbecue from Henry Perry, once said that Perry “started out with a hole in the ground”.

This suggests that early on Perry did his cooking outdoors. Old-timers remember that he wrapped his barbecue in newspaper, and advertisements from this period promote barbecued woodchuck, raccoon, and “possum”. It was, by today’s standards, a rather crude affair, but successful nevertheless. His operation continued to thrive, and by the 1920s Henry Perry had opened his first real restaurant at the corner of 19th and Highland.

Soon Perry had competitors; mostly other black men from the South who knew how to cook barbecue and were eager to imitate Perry’s success. In February 1932, twenty-five years after Henry Perry started selling barbecue from his pushcart in the Garment District, Kansas City’s leading African-American newspaper, The Call, published an interview with Perry. The article notes that there were “more than a thousand barbecue stands” in Kansas City at the time. Clearly, Henry Perry had started something.

Though there were many pretenders to the throne, Perry was the “Barbecue King”.   In his interview with The Call 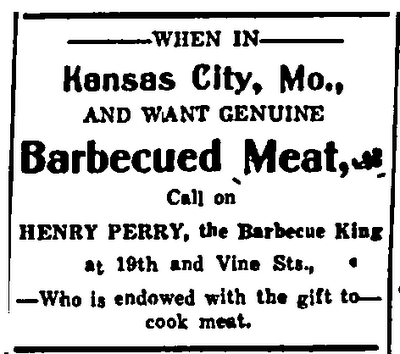 he explained why.   “It’s the special way I prepare my meats,”  he said.   “Cooking only over a fire made from hickory and oak woods the meat gets that delicious flavor which is the cause of the tremendous popularity of barbecued meats.”

Perry’s popularity and success drew the attention of commercial oven manufacturers who approached him with hopes of selling him their special barbecue ovens featuring “plenty of attractive doodads.” In fact, according to The Call, “Mr. Perry has been offered such ovens by competitors who wished to trade the new-fangled devices [in exchange] for a course in the Perry style of barbecuing.” 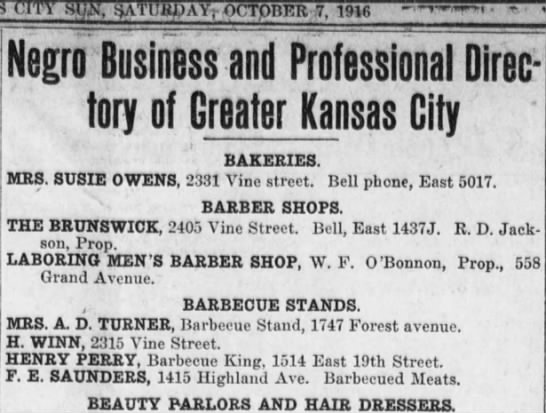 Perry’s response to these overtures reflected the confidence that comes with years of experience. “I told them I wouldn’t even have one of the things in my place,” he said. “There is only one way to cook barbecue and that is the way I’m doing it; over a wood fire, with a properly constructed oven and pit.”

Perry’s blunt manner of speaking was consistent with his image as a no-nonsense kind of guy. The article in The Call describes a sign that Perry posted in his restaurant that stated MY BUSINESS IS TO SERVE YOU, NOT TO ENTERTAIN YOU.

An anecdote found in another newspaper story from that time reinforces Perry’s tough guy reputation. Apparently he was working the counter at his restaurant when some poor fellow pulled a gun in a misguided attempt to rob the joint, whereupon Perry retrieved his own gun from beneath the counter and shot the would-be-thief dead.

Eventually King Henry ruled a barbecue kingdom that included three restaurants, one of which was managed by Charlie Bryant, Arthur Bryant’s older brother. When Henry Perry died in 1940, he left Charlie the joint he had been managing, and when Charlie retired in 1946, Arthur Bryant took over. Arthur Bryant’s Barbeque is still going strong to this day. Thus, the barbecue business Henry Perry started at the corner of 8th and Bank Streets in 1907 has been in continuous operation, under various owners and at various locations for more than 112 years.

Near the end of his life, Henry Perry reminisced about his career in the barbecue business. “I made a lot of money. And I made a lot of friends, ranging from humble neighbors to members of the moneyed groups.”

In its 1932 article, The Call observed that the popularity of Henry Perry’s barbecue did indeed transcend traditional social and economic dividing lines. Kansas City, it seems, was united in this regard. 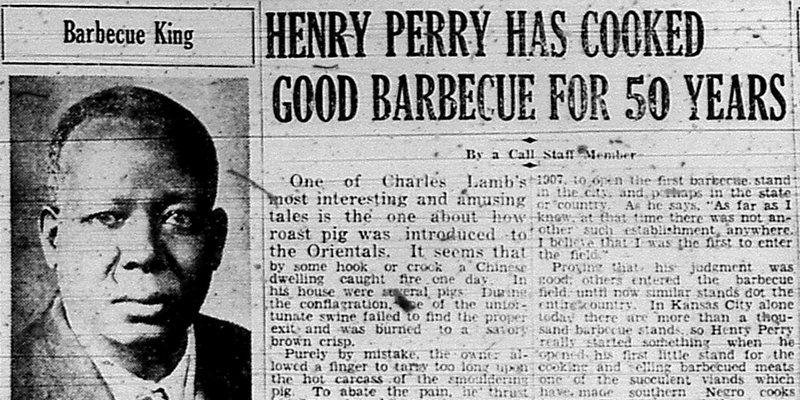 “With a trade about equally divided between white and black, Mr. Perry serves both high and low. Swanky black limousines, gleaming with nickel and glossy back, rub shoulders with pre-historic Model-T Fords. Liveried chauffeurs gaze haughtily at humble self-drivers, but all have the same ambition; to sink their teeth in a bit of Perry’s succulent barbecue.”

Doug Worgul is the author of The Grand Barbecue; A celebration of the history, places, personalities, and techniques of Kansas City barbecue (Star Books 2001) from which this article was excerpted. He is also author of the novel Thin Blue Smoke (Conundrum Press 2015).